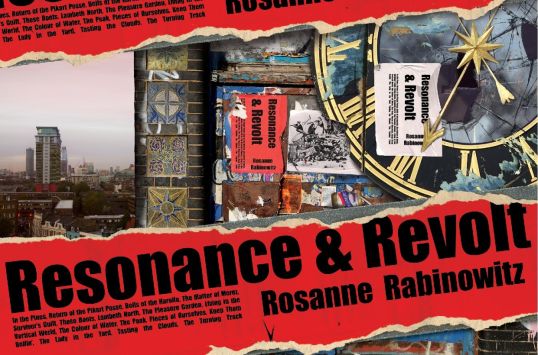 The final touches to my collection Resonance & Revolt are in progress and it should be ready to go to the printer very soon. Ebook editions will also be produced. There may be a further tweak or two on the cover but the picture above should give you a good idea of what it will look like. Meanwhile, the book is available for preorder at Eibonvale Press.

Eibonvale describes the book as an “intense and erudite collection of slipstream stories steeped in European history and the world of modern Britain”. This extract from the introduction provided by Lynda E Rucker – friend, fellow writer and cohort in several anthologies – expands on this:

At the heart of Resonance & Revolt is a radical reimagining of what the world could be, both politically and metaphysically. Revolutionaries spill out of its pages, whether they hail from 15th-century Central Europe, the present-day era of austerity in the UK or one of its likely near-futures…
Reading Rosanne’s stories feels like standing in the ruins of a thousand-year-old fortress where you can almost hear the past breathing around you, or in some other liminal place: a magical wood, perhaps, but sometimes the most ordinary of city streets, where you might slip into somewhere else before you realise what’s happened.
You will find all of those places in here, ruins and enchanted woods and city streets that unexpectedly contain magic, and more besides. This sense, of the permeable nature of time and place, is one of the things I love best in these stories, but there are others as well: the striking characters, artists and misfits and activists, many of them existing on the fringes but all of them tough survivors still engaged with the world around them.
The stories here make you want to look at the world more intently, for it is heaving with possibility if only we know how to look. This is an idea that comes up again and again, the sense that we need to pay attention. That there really is a deep mystery at the heart of it all, and it’s worth seeking it out.

When I’m so close to my own work, rubbing my nose in it on a daily basis, it’s easy to lose sight of its essence. It often takes another eye to put it all in perspective, and I thank Lynda for her inspiring comments. I hope those of you reading this will join me in seeking out the deep mystery and discovering that vision of the world as it could be.