So it’s time for Fantasycon! This year it takes place in Scarborough, known for its fair and a faded seaside ambiance that horror writers find particularly attractive – I can see the story-spinning wheels whirring already. For more information, have a look at the Fantasycon by the Sea website.

This time around I’ll be involved with three events: a panel, a book launch and a reading.

On Friday 23 September at 4pm I’ll be on a panel called Out of the Woods. The programme poses these questions: are we growing out of rural and into urban horror? Is it safe to go back into the woods? Steve Shaw will be chairing, and other panelists include Simon Clark, Collen Anderson, Ian Whates and Charlotte Courtney-Bond.

Those involved have already exchanged some lively emails and this promises to shape up into an intriguing panel. Sense of place has always been a subject close to my heart. My South London surroundings have played a big part in recent stories like The Pleasure Garden and Lambeth North. Other stories have taken place in the Bronx and the semi-suburban reaches of New Jersey as well as the Pine Barrens (Jersey Devil and all).

Next on my schedule is the Alchemy Press book launch that takes place on Saturday 24 September at mid-day. The unique Joel Lane tribute anthology Something Remains will be launched along with The Private Life of Elder Things. A lot of authors will be on hand to natter and sign a few things and there will be wine!

However, I will have to avoid over-indulgence in the wine because I’ll be involved with a reading shortly afterwards at 14.00-14.30. This will in fact be a joint reading with another Something Remains contributor, Jan Edwards. We will both be reading from our stories in anthology and we might say a few words ābout it too.

Speaking of Something Remains, it is the subject of a ‘realtime review’ from Des Lewis. I thank him for his in-depth coverage of the book, and for his kind  comments on “The Pleasure Garden”:

“Rosanne’s evolved fragment becomes an evocative summoning of the cranes as the girders of a cat’s cradle genius-loci of South London, now and then… Daniel reaches some Lane-like choreography (amid the ‘crane constellations’) with a music mix of old times and wrought passions, with not a diaspora but a regathering, a regathering, each to each, for this book, amid the still recognisable fragments of the Pleasure Garden…”

I will now close on a very different note. This hasn’t been a very up-close and personal kind of blog, but I will mention that my father died very recently. Though he was 91 and not well, it was a shock and it’s taken a while to sink in. I wasn’t sure if I’d make it to Fantasycon, until I remembered that my dad was a very show-must-go-on kinda guy. He’d want me to get on with it and do the things I love – writing, reading and schmoozing.

In his honour I’ll share some of his favourite songs. The Weavers come top of the list of old family favourites, and I’ve already posted a few times about them. So you’ll find some great Weavers tunes in my post about The Lady in the Yard and my tributes to Ronnie Gilbert and Pete Seeger.

Another album my dad loved was Brecht and Weill’s Threepenny Opera, specifically  the 1955 Broadway cast recording that features Lotte Lenya. He especially liked “The Army Song” (aka “The Cannon Song”) and sang along to it all the time. For years I thought the lines “Let’s all go barmy, let’s join the army” went ‘Let’s all go bombing…”.

Unfortunately all tracks from the 1955  album have been removed from YouTube but I’ve found a reasonable equivalent here.

Moving along into the 1970s, my dad got to be a Shel Silverstein fan and we all ‘dug’ “Freakin’ at the Freakers Ball”.

And needless to say, when we didn’t do our chores we were treated to this other Shel Silverstein number…

So I’ll also be lifting a glass to my dad sometime this weekend. I’ve already lifted a few over the past week. One of his favourites was Remy Martin – straight up!*

“Before there were queer activists, before there were Riot Grrls, there were the Rebel Dykes of London. They were young, they were feminists, they were anarchists, they were punks. They lived together in squats and at Peace Camps. They went to political demos every Saturday, they set up squatted creches and bookshops, feminist newspapers and magazines. They had bands like Poison Girls, Mouth Almighty, The Darlings and Well Oiled Sisters… This documentary film is being made because the history of the London Rebel Dykes of the 1980s is in danger of being forgotten. Rebel dykes created their own world, made their own rules, and refused to be ignored. So we can’t let history tidy them away.”

On 14 November Ladyfest Manchester will feature meetings, workshops and music AND the launch of the trailer for an exciting new documentary about those hell-raising 1980s Rebel Dykes of London. Unfortunately the day-long Ladyfest event is already sold out, but if you’re already going you might be interested in our presentation at 6.30pm.

Producer Siobhan Fahey will do a presentation with music, images and oral history. I’ll be reading from a story or two about my rebel dyke days, along with fellow writer Maj Ikle. Music on stage includes Lesley Woods (former Au Pairs singer and guitarist) and the film’s co-director Harri Shanahan will be playing with her band ILL. For the full line-up see the Ladyfest Manchester website or click on the schedule on the right.

For those who are interested but haven’t got a ticket to Ladyfest, Siobhan will do a similar presentation in London on 5 December at the Speak Up! Speak Out! queer history conference.

If the queer riot graphic at the top seems familiar to a few of you, I included it in my 2013 post, One Funeral and a Playlist. It’s based on the front page of a ‘zine called Feminaxe, the result of a hectic all-night lay-out session in 1987. We needed to get it to the printer so we’d have the paper for a Clause 28 march in Manchester. We did most of the typesetting on an Amstrad but these were the days before full-on computer design. Quark was only a creamy cheese our homesick German friends talked about, not the ubiquitous graphics application later replaced by InDesign. So lay-out involved cutting stuff up, laboriously scratching at those incendiary headlines in Letraset, spray-mounting and moving pieces of paper about, having a laugh but also getting grumpy with lack of sleep. And despite our greatest efforts, sticky bits of paper would inevitably be left stuck to the floor.

Those Clash-inspired lyrics with a queer twist came from a song by the Sluts From Outer Space, inspired by a fight with the cops on Downing Street during a Clause 28 march in 1987. Afterwards a few of us ended up revising “White Riot” as we made our way home. Another rewrite we perpetrated was “The Dykes of Brixton”: “You can nick us you can evict us but you have to answer to oh oh the Dykes of Brixton”. Well, I really did love the Clash, and still do. 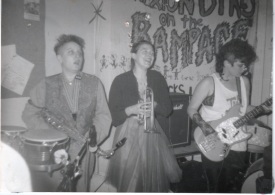 Three out of seven or eight Sluts. Briefly we were called Rebel Sleaze but that name never stuck

At Gay Pride 1988 in Jubilee Gardens

Beyond the parodies, our own songs included the (anti)bicentennial in Australia, more stuff about Clause 28, Restart interviews (forerunner to the benefit sanctions regime). And sex of course, with our finale number “Wild, Hot and Wet”.

Our biggest gig took place at East London Polytechnic in Stratford, where we supported punky-reggae band Culture Shock.  As I watched them, I was very impressed that the bass player played with three fingers. Oh yes, did I forget to mention that I played bass?

I recently saw that Culture Shock has been gigging again. Not so for the Sluts, I’m afraid. We split sometime in 1989 due to the proverbial personal and musical differences, or perhaps it was because some of us moved out of London. Whatever… We did have a brief reunion for a couple of numbers at a 1990 gig by Latin/Spanish band Los Lasses, which involved our drummer Jill.

There are no YouTube videos of the Sluts, and our recordings are just on cassette – I have one from a very chaotic rehearsal. It is currently being digitised but I expect to shudder when I hear it again! But I do have a photo of us performing in front of the wonderful banner we used for marches and gigs.

Unfortunately, the banner no longer exists. It was cut in half when someone at the squat where Feminaxe had an ‘office’ (an empty housing benefit office next to what is now the Hootenanny pub) used it for a curtain when she ran a rave. If I recall (and I could be wrong so many years after) it was a paid event. I regarded this as our own countercultural version of the backlash and creeping conservatism of the 1990s – OK now to use communal space in squats to make money, was it? So we had our disagreements; it wasn’t all sisterhood and sweetness. But maybe we’re getting out of the time period covered in the film…

Now, a word about my writing. Though I was reading a lot of speculative fiction, most of my own work at the time was non-fiction, polemic and straight-up realism. But in retrospect, I believe that the name of our band hinted at the more fantastical turn that my writing would take in the future…

Good news! My story “Lambeth North” will appear in the new anthology

from Megazanthus Press, Horror Without Victims.

So what is meant by ‘horror without victims’? Along with a few other writers, I was scratching my head for a long time as I turned the concept over in my mind… Initially, I came up with a satire on ‘positive thinking’ and psychobabble. In this regime,  someone who gets critical, angry or even mildly distressed will often be damned for not being ‘proactive’ and for playing the ‘victim’.

I discussed this idea with my “Turning Track” collaborator Mat Joiner, and we conceived a story based around an enforced job-seeker’s workshop. Within the context of claimant compulsion and the welfare-to-work racket, the ideology of ‘positive thinking’ has been assuming sinister and invasive – as well as laughable – aspects. See here for an account of this at a workshop run by poverty profiteering multinational A4e, and here for an example of compulsory and  nonsensical psychometric testing for JSA claimants.

Other online discussions suggested that ‘horror without victims’ could be found in any story that summons feelings of unease, dread or darkness, accompanied by a low or non-existent body count.  Work from writers such as Aickman was mentioned, or classic stories like Algernon Blackwood’s “The Willows”.

Well, in the end I submitted a totally different story than the one I started with Mat. “Lambeth North” was partly inspired by one of Arthur Machen’s less known stories, “N”. However, the locale is moved to South London, an area that Mr Machen apparently held in some disdain.

My collaboration with Mat will still go ahead, but we’ve come to realise that under the circumstances, we might really want to have some  &%!! victims in this particular story after all!