So it’s a new year – with two new reviews published over January!

Renowned publisher, writer and ‘real-time’ reviewer DF Lewis has now turned his attention to Bitter Distillations: An Anthology of Poisonous Tales. Limited editions usually receive few reviews so Des’ work is especially appreciated. He writes in his real-time review of my tale The Poison Girls: “This story will surely haunt me forever, and there is so much in it for me to tell you that, in the end, you can only tell yourself.”

Des’ selection of quotes from the story points to the circumstances that surrounded its writing: I completed The Poison Girls during the first lockdown last spring and summer. Though the poison in question did not concern viruses and pandemics those considerations certainly leached into the prose. After visiting her local poison garden my character Marla painstakingly washes her hands. She notices that the gardener wears a face mask (seen on the Alnwick Castle Poison Garden website). I wouldn’t have written details about careful hand-washing at any other time. A story might be historical – and even the 2019 sections feel very ‘period’ now – but current events draw different aspects of a historical setting to a writer’s attention.

Other stories in the book are:

A NIGHT AT THE MINISTRY by Damian Murphy
THE BLISSFUL TINCTURES by Jonathan Wood
THE TARTEST OF FLAVOURS by Rose Biggin
THE DEVIL’S SNARE by Timothy J. Jarvis
THE INVISIBLE WORM by Ron Weighell
CHATTERTON, EUSTON, 2018 by Nina Antonia
OUT AT THE SHILLINGATE ISLES by Lisa L. Hannett
THE OTHER PRAGUE by George Berguño
THE JEWELED NECROPOLIS by Sheryl Humphrey
NOT TO BE TAKEN by Kathleen Jennings
THE GARDEN OF DR MONTORIO by Louis Marvick
OF MANDRAKE AND HENBANE by Stephen J. Clark
BEYOND SEEING by Joseph Dawson
I IN THE EYE by Yarrow Paisley
CANNED HEAT by Jason E. Rolfe
WORDS by Alison Littlewood
AN EMBRACE OF POISONOUS INTENT by Carina Bissett

Then a review of Helen’s Story popped up in the Deep Cuts in a Lovecraftian Vein blog! This novella, if you recall, was published in 2013 and received a Shirley Jackson Award nomination in 2014. But that was a longish time ago. It’s always a wonderful surprise when I discover a review years after a book’s publication. It’s good to know that people are still reading and indeed, discussing something I’ve written. Bobby Dee, who coordinates the blog, invites readers to find out “why this is part of the essential reading experience of the Cthulhu Mythos”.

I loved the way the Deep Cuts review explores both the tension and inspirational relationship my novella has with its source material, Arthur Machen’s The Great God Pan. “The final sentiment, the last revelation, the apotheosis or ipsissimus that Helen experiences…is utterly apt. It is both an homage to ending in “The Great God Pan” and a negation of it; because it is not an ending at all but a beginning.”

Each Saturday Deep Cuts will feature a specific work that is important to Mythos literature and lore. You’ll find a schedule here. Their definitions are broad and subtle – it’s not all tentacles and ichor in the Mythos. I am honoured that Helen was included, along with these comments in the review:

“It’s the kind of approach that the Cthulhu Mythos is built on. Stories written not just as sequels, but as commentary and expansion, to correct old ideas and add new ones… Rabinowitz knocks it out of the park in how she interweaves flashbacks that reflect on the narrative of events in “The Great God Pan” (and another Machen story, “The White People”) with the continuing narrative of what Helen Vaughan is doing in the present day.” 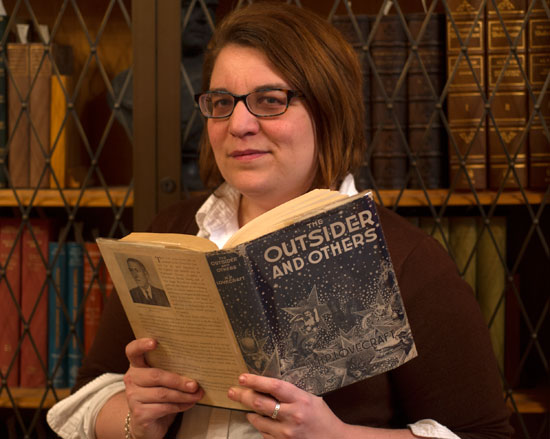 Everyone… listen to this podcast from Abebooks!

It originally came out in November 2018 but I was revisiting it yesterday. Because… Well, because listening to people say nice things about your book is just the thing you do on a Sunday afternoon to put off a long-delayed visit to the gym.

The podcast features librarian and rare books collector Rebecca Baumann, who shares her love for classic weird fiction. She also discusses contemporary writers who are inspired by the tradition, yet write against the sexism and racism found in the old texts.

She makes the point that the best critiques of classic fiction appear in other fictional works rather than formal literary criticism. And… ahem… this includes a big shoutout for my novella Helen’s Story, which she describes as “amazing”. And what’s more, I find myself inhabiting the same paragraph as Victor LaValle and his deconstruction of HP Lovecraft. That’s amazing too.

On the podcast page there’s a list of books discussed in the interview, which includes some from ‘lost’ women writers of strange fiction. This has opened some new reading territory. I’ve never heard of Rachel Ingalls, a US-born writer living in London, but found out about her here. I definitely want to check out her novella Mrs Caliban. In the podcast it’s compared favourably with the award-winning Guillermo del Toro film The Shape of Water.

So this podcast not only bigged up my own book but pointed me in the direction of a few others. Highly recommended. 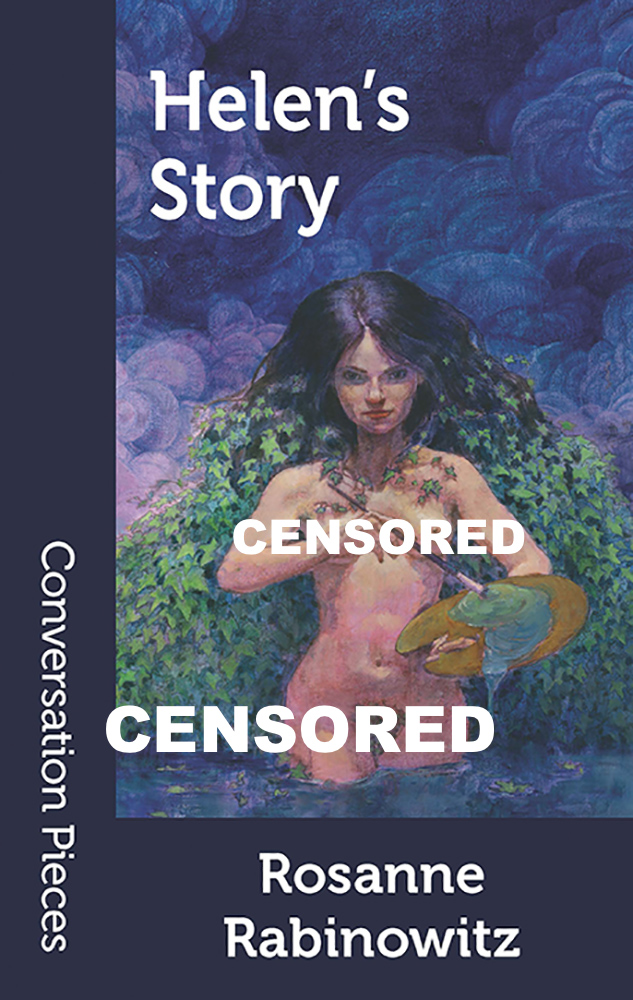 The US edition of Helen’s Story is now available from Aqueduct Press. This edition is also available as an ebook in Kindle (mobi) and epub formats – you can find the Kindle link here. It’s the very first time I’ve had my own ebook out, so I’m excited. You can read more about this in Aqueduct’s blog.

The startling and sensuous cover image from the 2013 PS Publishing edition will also grace Aqueduct’s version, with thanks to Seattle-based artist Erika Steiskal. However, the bods-that-be on Facebook have not been jumping up and down in joy. In fact, FB has been suppressing new posts with the image despite the fact that it’s been all over social media since 2013. When I first tried to post the link from the Aqueduct blog, it was blocked as ‘spam’.  When I clicked that my post was definitely NOT spam FB informed me that my post would be reconsidered as to whether it breaches ‘community standards’.

That was over a month ago. When I didn’t hear back I tried posting the link again and the same thing happened. Others have reported similar results.

This is gobsmacking. Either the folks at Facebook can’t write a decent algorithm or some techie is terrified by the mere sight of a finely drawn nipple and/or a luxuriant bush. It’s been suggested that the nipple might’ve led to the ban. To test the hypothesis I posted this gorgeous painting by Klimt, foregrounded nipple and all, but had no problem there. Go figure!

Meanwhile, Nancy Jane Moore has written an excellent post about Helen’s Story on the Bookview Cafe blog. She discusses the suppression of the cover image and also has lovely things to say about the book itself: “It’s an excellent book. I found it both delightful and disturbing, which is always a good mix.”

The good news is that I’ve managed to post a link from the Aqueduct website (rather than the blog), which has stayed up for a day or so. Perhaps it works because the image uploads in a smaller format. Fingers crossed that the algorithms of the great Lord Zuck have passed it by! And here’s the uncensored book cover, by the way. I love the portrait of Mary Shelley on the back cover too. 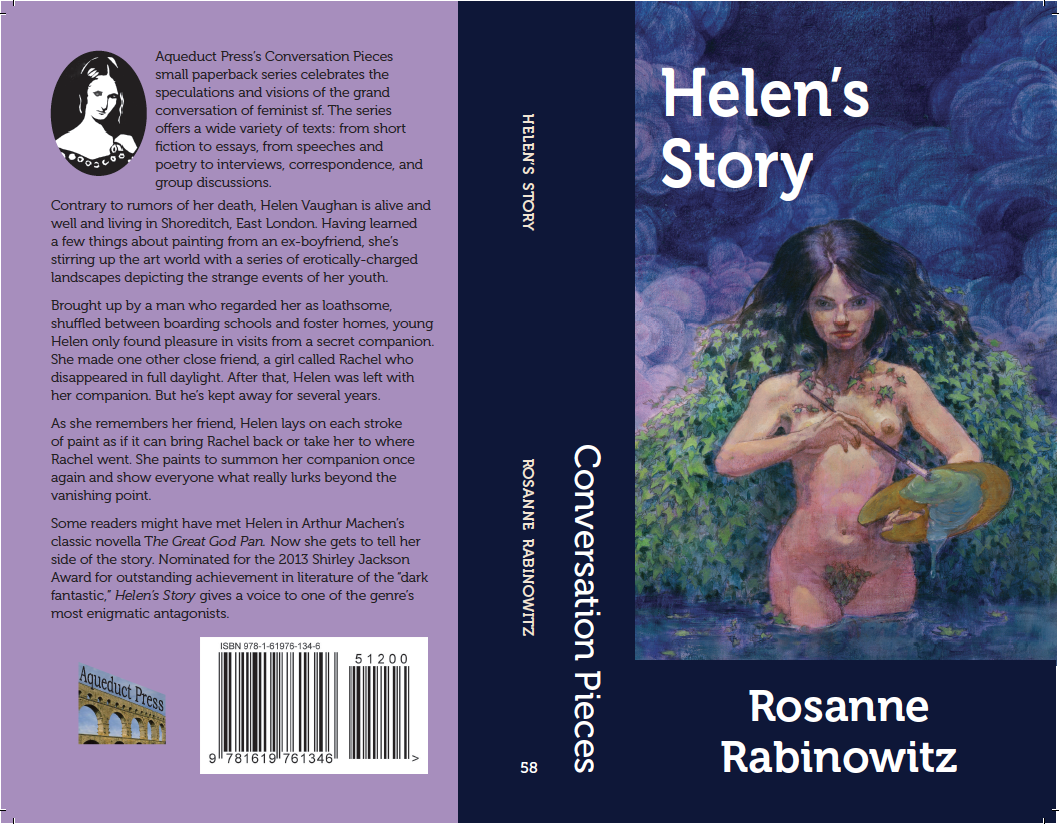 Now, it’s been a good few months since I’ve last posted in this blog. In that time I’ve been to WorldCon in Helsinki and held forth at a few panels. Two stood out for me. One was Fantasies of Free Movement, where we talked about borders and the dissolution of borders in fantastic fiction – with reference to Mohsin Hamid’s Exit West, Chris Beckett’s Marcher and the Fractured Europe series by David Hutchinson.

And I especially enjoyed Beyond the Cash Nexus. We had a big audience eager to discuss the following:

Ursula K LeGuin has called on F/SFwriters to imagine alternatives to capitalism: “We live in capitalism. Its power seems inescapable. So did the divine right of kings.” Have things moved on since The Dispossessed?  Is the opposite of dystopia necessarily utopia, is there are terrain where we can avoid the oversimplification of either? Can we portray radical visions when writing about the here and now, as well as secondary worlds, far future or extra-terrestrial universes?

This has actually turned up on YouTube, recorded in its entirety. Though it was a great panel while it was happening, I find I’ve only lasted ten minutes during attempts to watch the video. I’ll leave it to readers to do the search and be the judge.

Then I enjoyed a post-con holiday in the countryside. I spent time with some brilliant writers, especially the hospitable Anne Leinonen. Here’s a 2011 interview with her about the state of Finnish science fiction.

And when I returned it was time to move house. I’ve not actually moved far – up from the first floor to the ninth floor of the same block. It should have been an easy move but there’s been a multitude of hassles. It took over a month to get my WiFi on, which has been a definite contributing factor to the lateness of this post!

I’ll wrap up with some other news: I will be publishing a collection of stories with those wonderful folks at Eibonvale Press, purveyors of modern horror, magic realism, slipstream and the surreal. I previously had “The Turning Track”– a collaboration with Mat Joiner – published in Eibonvale’s anthology Rustblind and Silverbright and I look forward to working with Eibonvale again. Watch this space for more details.