So Resonance & Revolt has been out for a good few weeks! I was so absorbed in preparations for the launch a couple of weeks ago I forgot to mention that, as well as post about the launch in this blog. However, details were tweeted and also put on Facebook so I hope everyone who wanted to come knew about it.

I’ll write some more about the event itself but I’ll now highlight R&R’s first review from Des Lewis. If the name rings a bell, several stories in R&R such as “Survivor’s Guilt”, “Pieces of Ourselves”, “In the Pines”, “The Pleasure Garden” and “The Turning Track” have received Des’ treatment on first appearance, which I’ve featured in previous posts. “Lambeth North” had actually appeared in one of his own anthologies, Horror Without Victims.

Des Lewis’ ‘real-time’ reviews are unique, thought-provoking and always a treat to read. They’re packed with word play and poetry as they unearth associations and currents in the work that I might miss myself when I’ve been so close to it. Other writers describe similar experiences of discovery and regard a Des Lewis review as a work of literature in its own right. I second that. Perhaps you can call this a review of a review. I always feel very honoured by the attention and thought Des puts into his reviews.

They are usually beautifully illustrated as well. I’ve included his cut-out of the tiles from “Lambeth North” that appears on the cover of R&R below, which he connects with the avatar he uses on website. After his exploration of each story, Des sums up:

“Resonance & Revolt. From Didcott to Didactic, a grail or Rosannation for socialist outreach but made even more palatable as percolated by truth and inspirationally infused by the book’s creative tapping of histories, myths and alternate visions, transfigured from rustblind through to silverbright. Some very important stories in this book transcending any didacticism. And a gestalt of them all that will be enduring. And a book cover that sings out with all these things.”

On 19 May we launched R&R, along with more books published by Eibonvale, Snuggly Books and other imprints. A major thanks goes out to anyone who came and helped make it such an enjoyable afternoon. Books were read (and sold), chats were had, drinks  were drunk and snacks were noshed. The sun was shining in the beer garden… Readings came from myself, Rhys Hughes, Quentin S Crisp, Terry Grimwood, Tom Johnstone and Allen Ashley.

The event was MC’ed by Allen Ashley, who did a stellar job at the 2013 event that launched Helen’s Story, Rustblind and Silverbright, Stardust and other books. I read extracts from “The Pleasure Garden” from Something Remains – since we were very near to its location amid the cranes and building sites of Nine Elms – and closed the readings with an extract from “The Matter of Meroz”, which first appeared in Jews vs Aliens. The passage involved the enjoyment of certain Jewish delicacies as a sensory means of creating wormholes – or as known respectively in the Talmud and the Book of Deborah – the ‘leaping of the roads’ and the ‘crumpling of the sky’.

Rugelach plays a key role in this process. They’re small pastries made from a dough with cream cheese or sour cream, plus whatever you fancy putting in them. We distributed some cinnamon-spiced samples after the reading. And you know what? Maybe the road did leap just a little, or else it could’ve been the free beer having its effect!

After the launch about 25 of us went to Mamuska, a Polish canteen style eaterie at Elephant & Castle. All in all, it was a lovely way to mark the passage of R&R into the world.

You can buy Resonance & Revolt in paperback and hardback formats from most online booksellers – Amazon, Foyles and others – and from Eibonvale Press. Meanwhile, an ebook edition is also in the works.

I’ll finally add that if you have a blog or publication and want to review R&R, get in touch with Eibonvale.

Here’s a quick shout-out that Helen’s Story has received another late review, this time from Peter Coleborn. He writes:

Thanks for your kind words, Peter!

In addition, Helen gets a mention on a Spanish website. I’m not sure exactly what they’re saying, but I think it’s good.

Meanwhile, Something Remains has been given one of Des Lewis’ legendary real time reviews. He describes my contribution “The Pleasure Garden”:

“Rosanne’s evolved fragment becomes an evocative summoning of the cranes as the girders of a cat’s cradle genius-loci of South London, now and then.”

Anthony Watson has also selected Something Remains as the year’s best anthology on his Dark Musings blog:

“The stories within are inspired by, and based on, notes left by Joel and each individual author has done a remarkable job in creating them in such a way that you would believe Joel had written them himself. It’s a superbly produced book and I can think of no better way to honour his memory.”

And now for some more downbeat news… non-profit independent publisher Jurassic London has wound up its operations. We’re very sorry to see them go. However, we can take some small comfort that a new home has been found for Jews vs Aliens and Jews vs Zombies  at Ben Yehuda Press. The proceeds will continue to benefit Mosac, a charity that provides support to non-abusing parents, carers and families of children who have been sexually abused.

Moving on to another story published by Jurassic London, I’ve decided to put “Keep Them Rollin'” on my new free fiction page. This story first appeared in the 2015 Jurassic anthology We Need to Talk. While ghost stories are usually the tradition for this time of year, I’m going for some SF: quantum computing meets Universal Credit. It’s the first time I’ve put my own fiction on line, and I enjoyed illustrating it with some appropriate bits and pieces.

I’ll close this post with the song that gave “Keep Them Rollin'” its title – the theme from Rawhide. Below you’ll find my favourite version by The Men They Couldn’t Hang.

On the story page itself I’ve included another cover by US ska punk band Sublime. While it doesn’t have the best sound quality, the clip from Sublime does evoke that late 1980s/early 1990s festival atmosphere. 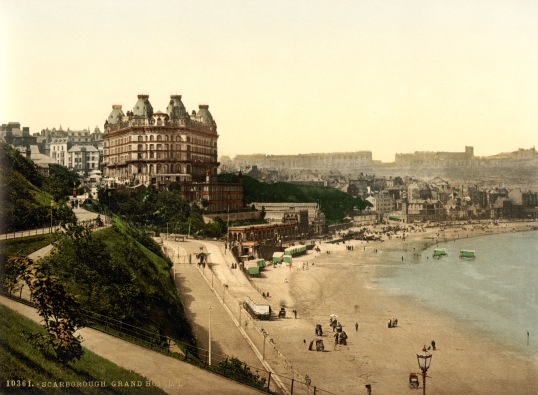 So it’s time for Fantasycon! This year it takes place in Scarborough, known for its fair and a faded seaside ambiance that horror writers find particularly attractive – I can see the story-spinning wheels whirring already. For more information, have a look at the Fantasycon by the Sea website.

This time around I’ll be involved with three events: a panel, a book launch and a reading.

On Friday 23 September at 4pm I’ll be on a panel called Out of the Woods. The programme poses these questions: are we growing out of rural and into urban horror? Is it safe to go back into the woods? Steve Shaw will be chairing, and other panelists include Simon Clark, Collen Anderson, Ian Whates and Charlotte Courtney-Bond.

Those involved have already exchanged some lively emails and this promises to shape up into an intriguing panel. Sense of place has always been a subject close to my heart. My South London surroundings have played a big part in recent stories like The Pleasure Garden and Lambeth North. Other stories have taken place in the Bronx and the semi-suburban reaches of New Jersey as well as the Pine Barrens (Jersey Devil and all).

Next on my schedule is the Alchemy Press book launch that takes place on Saturday 24 September at mid-day. The unique Joel Lane tribute anthology Something Remains will be launched along with The Private Life of Elder Things. A lot of authors will be on hand to natter and sign a few things and there will be wine!

However, I will have to avoid over-indulgence in the wine because I’ll be involved with a reading shortly afterwards at 14.00-14.30. This will in fact be a joint reading with another Something Remains contributor, Jan Edwards. We will both be reading from our stories in anthology and we might say a few words ābout it too.

Speaking of Something Remains, it is the subject of a ‘realtime review’ from Des Lewis. I thank him for his in-depth coverage of the book, and for his kind  comments on “The Pleasure Garden”:

“Rosanne’s evolved fragment becomes an evocative summoning of the cranes as the girders of a cat’s cradle genius-loci of South London, now and then… Daniel reaches some Lane-like choreography (amid the ‘crane constellations’) with a music mix of old times and wrought passions, with not a diaspora but a regathering, a regathering, each to each, for this book, amid the still recognisable fragments of the Pleasure Garden…”

I will now close on a very different note. This hasn’t been a very up-close and personal kind of blog, but I will mention that my father died very recently. Though he was 91 and not well, it was a shock and it’s taken a while to sink in. I wasn’t sure if I’d make it to Fantasycon, until I remembered that my dad was a very show-must-go-on kinda guy. He’d want me to get on with it and do the things I love – writing, reading and schmoozing.

In his honour I’ll share some of his favourite songs. The Weavers come top of the list of old family favourites, and I’ve already posted a few times about them. So you’ll find some great Weavers tunes in my post about The Lady in the Yard and my tributes to Ronnie Gilbert and Pete Seeger.

Another album my dad loved was Brecht and Weill’s Threepenny Opera, specifically  the 1955 Broadway cast recording that features Lotte Lenya. He especially liked “The Army Song” (aka “The Cannon Song”) and sang along to it all the time. For years I thought the lines “Let’s all go barmy, let’s join the army” went ‘Let’s all go bombing…”.

Unfortunately all tracks from the 1955  album have been removed from YouTube but I’ve found a reasonable equivalent here.

Moving along into the 1970s, my dad got to be a Shel Silverstein fan and we all ‘dug’ “Freakin’ at the Freakers Ball”.

And needless to say, when we didn’t do our chores we were treated to this other Shel Silverstein number…

So I’ll also be lifting a glass to my dad sometime this weekend. I’ve already lifted a few over the past week. One of his favourites was Remy Martin – straight up!*