ooting up. And the new viewers come from all over: Cyprus, Brazil, Bulgaria, South Africa, Australia, Brunei Darussalam (first I heard of the place), US, Latvia, Vietnam, Peru, Kenya…

Is it likely that all these people – perhaps you, dear reader – have read one of my tales and want to know more about my work or the peculiar mind behind it? Or have new viewers taken an interest in some of the political issues I’ve touched upon or ranted about? Or maybe, just maybe a review of Helen’s Story has appeared in some mass circulation paper or website, which has somehow escaped the net of my repeated vanity googling…

So I’ve been sifting through my WordPress stats, trying to divine their meaning as if they are tea leaves or the entrails of sacrificed animals. As expected, the WordPress oracle reports a vast majority of search terms as ‘unknown’ or ‘other’. But I also get a solid number of search variations on ‘booby’, ‘boobies’, ‘boobys’, ‘boobi’.

It’s likely that the rise in visitors has something to do with that rather than my literary output. But what kind of boobies are we talking about? It could be the feathered, often blue-footed variety or a certain part of the female anatomy. Perhaps a mixture of both. One search term did specify ‘boobi bird’ and the critter on the right has been getting a lot of clicks. And when I did my own booby-oriented search on Google, the birds came up most. After all, breasts are usually called ‘boobs’ rather than ‘boobies’ by adults.

On the other hand, I suspect that the individual who searched for ‘boobies, boobies, boobies’ probably was not concerned with the wildlife of the Galapagos Islands.

I’m still bemused by this sudden surge in viewers because boobies have been a fixture on this site for months. I use a booby image as my WordPress ‘blavatar’, and I’ve posted a dancing booby a while ago to signify my pleasure over a positive review. I also wonder why the biggest portion of hits come from the US, when up to now visitors have been mostly drawn from my home turf in the UK. Could there be a huge concentration of booby fans in the US?

Booby appreciation
I also checked whether a booby appreciation week sponsored by a conservation organisation could be inspiring a spike in booby-oriented searches. The (UK-based) Galapagos Conservation Trust does indeed hold fundraising drives where supporters dress up like boobies and do booby dances, but according to the trust’s website the most recent Blue-footed Booby Day took place in June 2011.

I’ll hasten to add that the booby imagery was not intended as a crafty exercise in search engine optimisation. I genuinely like boobies. Perhaps you can recall a recurring drunken end-of-party conversation: “If you were an animal, what would you be?”

I often replied ‘Cat!’ because I loved cats. But come to think of it, as much as I like cats, feline really isn’t me. After all. cats take themselves very seriously. They’re cool. No… If you compared me to an animal, it would have to be a blue-footed booby.

Boobies are comical, they like to dance! And the dance they do reminds me so much of those 80s reggae moves that involved lifting one foot, than the other, swaying and knee-bending to heavy spliff-laden dub. So many fond memories there…

Your feet’s too big
Maybe I identify with boobies because I underwent plenty of piss-taking when I was a kid for having big feet. I heard that Fats Waller song ‘Your feet’s too big’ too many times. Finding daintier or more fashionable footwear was impossible, unless I went to an expensive specialist shop or had a rare stroke of luck at TK Maxx.

But the booby is actually admired and loved for its prominent and colourful feet. What’s more, big feet are considered highly fanciable in the booby world – the bigger and brighter the feet, the more likely a dancing booby will pull.

So if you’re a booby lover stumbling on to this site by accident, were you disappointed? “What! Is that all the booby action you get? That’s some real sneaky SEO. Who the fuck is this Rosanne person anyway?”

Or could you be thinking, hey here’s another weirdo who likes boobies. So let’s look at this novella thing here. Could Helen’s Story be about one woman’s struggle to establish herself in the man’s world of ornithology?

But in any case, I’ll extend a big welcome. Maybe I don’t offer what you set out to find originally, but have a look around. The beauty of the internet lies in surprise. I’m very curious to hear what brought you here, so feel free to post comments. And if you like the boobies, you just might like the books too. 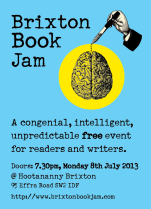 “The Brixton BookJam is an eclectic gathering for people who are passionate about books and the written word. It’s a mix of readings, talks and panels, chatting and socialising.”

If you think that sounds good, come along this Monday, 8 July! I’ll be joining the fun, doing a reading stint along with 10-12 other writers. MC for the evening will be comedian Ivor Dembina.

The Hootananny pub is at 95 Effra Road in Brixton,
London SW2 1DF. Doors open at 7.30, readings start at 8. Keep in mind that this is all free!

I’ve been going to this pub for many years, back to its previous incarnations as the George Canning and the Hobgoblin. It’s been a site of  diverse musical interludes, adventures and misadventures. So it’ll be a thrill to do a little turn there at last.

Meanwhile, I want to thank everyone who came to our launch last Thursday at the Review Bookshop in Peckham. The place was packed out, and it was standing room only. Many had traveled from far-flung places including Portsmouth, Glasgow, Birmingham, Oxford and Norwich (not to mention Hackney and Wood Green).

I think it was a good idea to launch several (well, five) books together, which turned it into a major event. Our able MC Allen Ashley joked that a bomb falling on the Review Bookshop that night would obliterate most of the slipstream and indie publishing world.

However, I’m pleased to say that the evening went ahead without any untoward incidents.  I’m only sorry I didn’t get a chance to chat with everyone.

If you didn’t make it the launch, you might be interested in this special deal from PS, featuring a reduced price if you order Helen’s Story and Nina Allan’s new book Stardust together. This applies to unsigned and signed editions. It’s still up on the PS website, but it will be available for a limited time only.