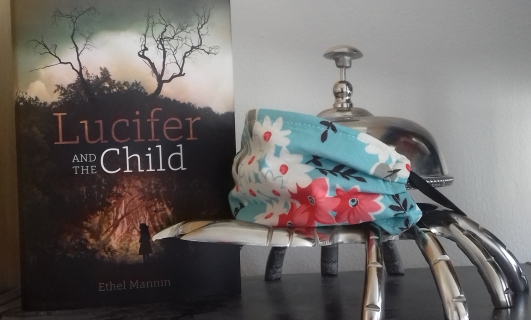 I am back with a long-overdue blog post, which begins with an exciting announcement: a lost classic of  London-based strange fiction that has figured prominently in previous posts has now been reprinted by the fabulous Swan River Press!

Yes, I’m talking about Ethel Mannin’s book Lucifer and the Child, first published in 1945. I recently discussed my research into Ethel’s life and work for The Shiftings, a tale that appeared at the end of last year in The Far Tower: Stories for WB Yeats. So I was very pleased and proud when Brian J Showers from Swan River Press asked me to introduce their reprint of Lucifer. Since my crab bell helped celebrate the launch of The Far Tower it is only fair it celebrates the launch of Lucifer – wearing a snazzy new facemask for the occasion.

Ethel Mannin’s best-selling books included fiction, journalism, short stories, travelogues, autobiography and political analysis. Born into a working-class family in South London, Mannin was a lifelong socialist, feminist and anti-fascist. She is virtually unknown today so I’m glad she is finally being rediscovered and reprinted.

“This is the story of Jenny Flower, London slum child, who one day, on an outing to the country, meets a Dark Stranger with horns on his head. It is the first day of August — Lammas — a witches’ sabbath. Jenny was born on Hallo-we’en, and possibly descended from witches herself . . .
Once banned in Ireland by the Censorship of Publications Board, Lucifer and the Child is now available worldwide in this splendid new edition from Swan River Press featuring an introduction by Rosanne Rabinowitz and cover by Lorena Carrington.”

This is the first intro that I’ve done and I found it a very enlightening experience. The form is very different to a review and it also differs from a critical essay. It was a challenge to avoid spoilers yet provide more depth than you would in a review. My introduction also appears on the Swan River website so you can read it here if you’d like to find out more about the book and its author. Here’s the page where you can order the book. Lucifer and the Child had been released on Lammas Eve, 30 April.

So why has it taken me so long to post about it? During the weeks of lockdown you’d think I’d be blogging up a storm. Instead I’ve been very distracted: struggling with deadlines, reading, listening to lots of news, trying to exercise, keeping in touch with friends through social media, zooming and listening to lots of music too. I’ve often felt like I was butterfly-stroking through treacle when I tried to get anything done.

I’ve discovered that many other writers have found that extra lockdown time hasn’t necessarily translated into more writing time. As I continue to haul proverbial ass to meet an extension of an extension of a deadline, I’ve only just realised why the protagonist in my new story keeps coming out as very disconnected from everyone. It’s because I’ve been disconnected! No shit, Sherlock.

I’ve been on my own because my partner lives in Oxford. I’ve always liked living on my own while welcoming my regular visitors. In past weeks I’ve had moments of regret for this choice, but also appreciate it when others write about the stresses of living with people they might not live with under other circumstances. I’ve been very fortunate to stay healthy, to not lose any loved ones and to be paid in full by my employer.

Like many other folks I’ve compiled a pandemic playlist on Spotify and I’ve enjoyed listening to the lists made by others – there are thousands upon thousands of them. I’ve found an amazing range of styles and moods. Some people concentrate on dance music and stuff for indoor exercising, others are dark and gothic, still others are upbeat and intended to cheer. Some songs comment on current events, others were chosen to forget and escape for a while.

I will be writing more about the songs on my list – very soon, believe it or not – and why I selected them but in the meantime have a listen to Life During Lockdown and hopefully enjoy. Here’s the song that kicked it off almost two months ago – a slice of angsty indie-ness that’s surprisingly catchy.

During this time I also wrote short reviews of two stories by Robert Shearman that are part of his 101-story three-book collection We All Hear Stories in the Dark. My two are only part of a massive cycle of reviews for each story on the Gingernuts of Horror website. Here’s an introduction to the book’s concept from PS Publishing:

You can order the book from PS at the link above. Meanwhile, you’ll find the reviews at Gingernuts of Horror, kicked off by Jim McCleod’s introduction. At the bottom of Jim’s intro you’ll find links to four pages of reviews for all 101 stories. My reviews of The Cocktail Party in Kensington Gets Out of Hand and The Swimming Pool Party are in part 3.

Last, I’ll end with a recent review of Resonance & Revolt – along with a host of other fine books – from Terry Grimwood on theEXAGGERATED Website:

“Filled with subtlety and nuance, its narratives alive with passion, anger mingled with sympathy, empathy and gentleness, Resonance & Revolt is an intense read, sometimes difficult and ambiguous, sometimes funny and melancholy, but always rewarding.”

So if you fancy an “intense read” as the furloughed days grow longer, remember that the Kindle edition of R&R is still only 99p!