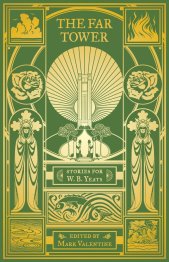 I’ve been very excited to see that The Far Tower: Stories for WB Yeats from Swan River Press is out in time for the festive season. I received my contributor copies the Friday before Christmas. And what a sight! I’ve never seen a book cover with gold foil. Cover artist John Coulthart has written about his design work on the book here and here. His cover took inspiration from Yeats’ 1928 book The Tower, which also featured a green and gold colour scheme.

You can read editor Mark Valentine’s introduction to The Far Tower on the Swan River Press website, which will give you an idea of what lies within this stunning cover. Other contributors include Ron Weighell, DP Watt, Catriona Lally, John Howard, Timothy J Jarvis, Derek John, Lynda E Rucker, Reggie Oliver and Nina Antonia. Many of these authors appeared in The Scarlet Soul together, which was also edited by Mark Valentine. It’s great to be sharing a table of contents with the gang again.

My viewpoint character in “The Shiftings” is Ethel Mannin – a writer who had published over 100 books of fiction and non-fiction in her lifetime. She was a journalist, anti-fascist organiser, a comrade of Emma Goldman and a close friend – possibly a lover – of WB Yeats later in his life. I refer to her in my account of the Dublin Ghost Story Festival where her novel Lucifer and the Child came up in a panel on lost supernatural classics.

I first encountered Ethel in relation to Emma Goldman and their joint work supporting Spanish anarchists and solidarity efforts for refugees. This led me to my local library looking for her work. I didn’t find anything about her political activities but I did find old editions of Lucifer and the Child and Venetian Blinds, a novel about the price of upward mobility.

Much more recently I read about Ethel’s relationship with WB Yeats. It has been portrayed as an “intense friendship” and an affair of sorts; at one point they could have been lovers. He was pushing 70 and she was in her 30s. They had very different world views – Lucifer was her one engagement with fiction that could be considered supernatural. Though she had shared an interest with Yeats in Irish folklore, she had little interest in mysticism. She was also an active antifascist and socialist when Yeats was dabbling with the Irish ‘Blue Shirts’ and put out a pamphlet titled The Boiler, which has been described by even his most admiring biographers as a bigoted rant. With eugenics.

Yet they enjoyed each other’s company and kept up a correspondence until Yeats’ death. She had written in her book Privileged Spectator: “Yeats full of Burgundy and racy reminiscence was Yeats released from the Celtic Twilight and treading the antic hay with abundant zest.”

Ethel’s life has always fascinated me, so when Mark Valentine invited me to write a story for his anthology I thought about her and Yeats. At the same time, I’m also one for casting a wide net. While reading collections and biographies of Yeats I also tracked down Ethel’s writing on various websites. As usual, I totally geeked out on the research. It was in fact fortunate that I wasn’t able to locate all of Ethel’s 100+ books but did manage about eight. I found scraps of biography online and tracked down a book about her marriage to anti-war and Indian independence activist Reginald Reynolds in the Imperial War Museum reading room. I also received assistance from Sue George, who had written an MA thesis about Ethel and Nerina Shute, another ‘lost’ woman writer of the period. Check out this blog post from Jeanne Rathbone for a summary of Ethel’s life and work; it’s part of a series on notable women of Lavender Hill in Battersea.

My story starts with Ethel as she is approaching 80 and living in Devon,

where she is devoted to her rose garden. She is startled by a young visitor and then, a very old one – a long-dead friend by the name of Willy Yeats. She’d put a spring in his step in his later years… what effect will he have on her own?

Shortly after publication the mighty Des Lewis began his real-time review of The Far Tower. He describes “The Shiftings” as a “real Christmas Day treat” and writes: “Dare I say, even in its surrounding great canon… this is this author’s classic story, until she writes another one.”

I will now thank Des for providing me with a brilliant holiday treat of my own with his review.

And now I’ll backtrack to the weekend before Christmas, which boasted another astounding highlight on the Saturday… Not only did I get to hold this magnificent book, but I finally acquired my very own crab bell at the Hammersmith TK Maxx. A crab bell is very special  to the thousands in a Facebook group called the TK Maxx Gallery of Horrors. The group has been described as a cult. I’m not sure about that, but it’s true that I have felt positively uplifted after immersing myself in the array of absurd and surreal tat. Among the items most coveted by the denizens of the gallery is the crab bell – and I now have one! For another perspective on this realm of the ridiculous visit this post: We demand more crab bells.

Here’s a photo of The Far Tower and my crab bell together, joined by a bottle of whisky. 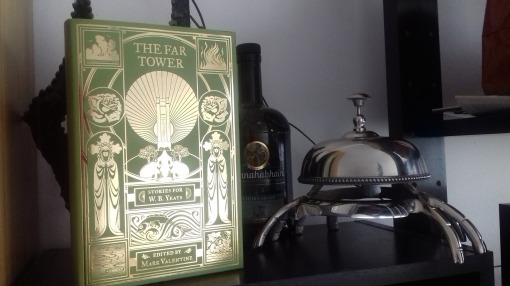 Post-Election Blues
Before the election on 12 December, I started to write a piece about antisemitism and how it is being manipulated by Tories and the Labour right. I didn’t finish it in time, but sadly the issue is still very relevant amid increased attacks on all minorities. The playbook is now being refined; in the US the charge of antisemitism is applied to lefty Jews such as Bernie Sanders and cartoonist Eli Valley. I usually hate it when nouns are verbed but in this case ‘Corbyn’ as a verb is spot-on for this process. Jewish people who refuse to be right wing tools or furnish apocalypse fodder to the fundies – prepare to be Corbyned! Meanwhile the most powerful antisemites among Republicans, Tories and the far right are waved on. I’ve so far made notes and collected links and plan to get something ready soon.

In the meantime, I’ll express my post-election rants and ruminations with music. Have a look at my Spotify playlist Post-election Rants and Reflections. Songs range from punk to reggae to klezmer to folk, rap and blues. Some have already appeared on this blog, others are newly discovered. Not all of these tunes are directly related to the election but they either express my mood or help lift it. I’ve tried to avoid pure misery on one hand and empty triumphalism on the other. Sometimes a touch of resolute melancholy is what you need.

At other times we need pure hedonism, at least for a day or two… So here’s a song that’s featured on my playlist.

“I wanna dance like we used to / Before the new world order ruled…” I wish further holiday fun and a happy New Year to you all!

One response to “The Far Tower arrives in green and gold, I find the coveted crab bell and spin a post-election playlist”